WHS (sort of) and Norco Build

So I rebuilt my WHS (Windows Home Server) - sort of.

Originally (see my previous post), I was going to make a new server using the Norco 4020 (I know the post says 4220) and a Highpoint 3540. The idea was to get the lowest cost per port. The 4020 case uses SATA cabling on the backplane and the 3540 RAID card comes with a whole bunch of SATA cables, so I would have everything I need to hook it all up.

I didn't know much about SAS Expanders, but I had heard about them. So....after more investigation, I decided to get a Highpoint 4320 raid card instead. It was $482 from Newegg.ca and has 2 SFF-8087 Mni-SAS connectors. These connectors breakout to 4 Sata connectors each. But then you say, "I thought you wanted 20 drives?!".

So...I found the Chenbro at http://www.ncix.com/ for about $280 CDN. That means the total cost of the RAID card combo is now $762 - about the same as the 3540 was going to be, but now I have more expandability, plus I am now going to use the Norco 4220 case which uses the SFF-8087 connectors on the backplane, so I will have much less cabling.

I was gonig to buy everything from newegg.ca, but NCIX often has sales on hard drives and they price match, so when I called them, they were willing to meet the pricing I got from Newegg on the case etc. The only thing they didn't have was the Highpoint RAID 4320 card. So here is my shopping list (prices all in Canadian):

I went cheap on the motherboard, CPU and RAM as I didn't feel I needed to worry about speed too much. Nor did I really need alot of PCI slots. And the board had built in video and a gigabit lan connection. The thing I DIDN'T want to cheap out on is the Power Supply. This is going to be my main storage unit with my only copies of files (although I do use http://www.livedrive.com/ for off-site backup). I could have bought a $14 power supply, but then it would have been the weakest link and I didn't want it to cause any issues.

After I received the gear I began putting it together.

I have built several NAS boxes before using Chenbro cases and Areca RAID cards - they are nice, but the total cost would have doubled.

I was fairly pleased with the build quality of the Norco case - considering the price. The only thing that seems a little "cheap" are the drive trays. They work ok and fit nice....I just don't think you want to be rough with them - they won't take it. The Chenbro drive trays are much more robust in comparison.

When I put the motherboard in, it looked very small in the space - you could easily fit a much bigger motherboard with many more slots.

The Highpoint 4320 needs a PCI-E x8 slot and is compatible with the x16 slot usually reserved for the video card, so I used that. The Chenbro CK12803 fits in any slot. It doesn't really use the PCI bus at all - the slot is just to hold it in place. It gets power from a standard power plug.

The space between the fans and the hard drive backplane is fairly tight, so getting the power plugs in was a little bit of a challenge.

I had read a number of comments that the fans in this case are really loud - so I was prepared. As I indicated above, I have built a number of NAS boxes before and they can be quite loud.

However, when I powered on the machine, I was pleasantly surprised. It didn't seem that loud to me. I checked it with a DB meter and at 1 meter (3 feet), the rating was 58 db. I am putting all my stuff in my heated garage anyway, so I didn't really care - I can't hear any of it.

Next I installed 2 500 GB drives in a mirror to use for boot drives. I decided to go with a standard Windows 2008 install instead of a WHS (which is why the "sort of" in the title).

The other reason to go to Windows Server 2008 is the new SMB version 2.1 - it increases speed of transfers when going from/to a Windows 7 machine.

I am keeping the old WHS around in a much smaller capacity in order to handle backups etc.

Then I created a RAID 5 from the 3 2 TB hard drives. I set the RAID 1 Mirror as boot in both the RAID card and in the Bios, booted the machine and loaded Windows 2008. I had to have the drivers on a USB in order to load them during the installation process, but other than that, it was all smooth.

Once I had the system running and performed the standard windows updates, I enabled the guest account so that I would have no issues with sharing the folders with various machines - and Xbox 360 - around the house. Yes, that is a major security issue, but this machine is safely isolated behind my firewall and no one outside of my system has any access to it.

Next I performed some performance testing.

WOW! Was I impressed. On the Raid 5 and with only 3 drives, I was not expecting massive performance, but I got a consistent 250 MB/sec transfer rate. Yes...that is 250 megaBYTES per second. Since I only have a single gigabit lan connection, I will be liimited to a max of 100-120 MB/sec, but that is still plenty fast. I may get a dual NIC Intel card and bond the two channels together to get a 2gb lan connection later on.

Here is the output from ATTO Benchmark: 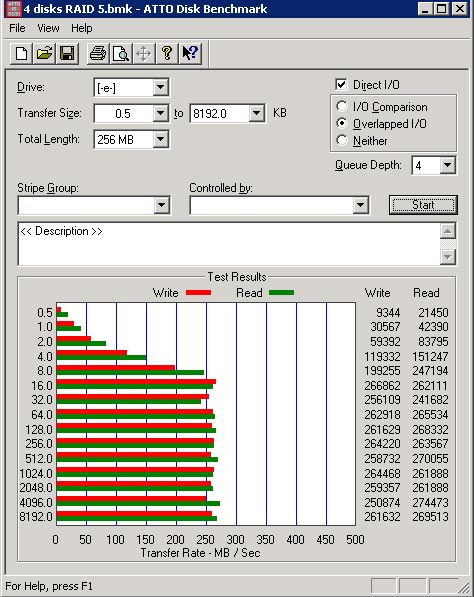 I am currently moving all my data from my old WHS to the new server and all is going well. As I move the data, I am removing the old drives from the WHS and adding them to the 2008 server. I am using ORM (Online Raid Migration) and OCE (Online Capacity Expansion) to allow me to move to a different RAID (RAID 5 to RAID 6) and to allow me to expand my disk size without taking anything down. This will take several days to complete, but I have the time.

The last thing I am doing with this is to install the free version of the Starwind Software iSCSI target. This allows me to use this box as a storage server for my small VMware ESX (vSphere) farm where I keep all my virtual machines running (SBS, Asterix PBX, Mailcleaner Spam and a Linux server that is a LAMP box).

I am going to end up with 6 2TB drives running a RAID 6 (total of 8 TB of space) and I will have 12 empty drive bays that I can use for expansion.
Overall I am extremely pleased with the result and would highly recommend this solution to anyone else looking to build an inexpensive storage server in their home or small business.

Jim Nickel
Jim is a VMware VCP. He has also done a fair bit of work with Hyper-V (VMware is better). He enjoys working with enterprise class storage, switches and pretty much any other technology he can get his hands on. Oh yeah...and video editing and audio recording/mixing.